I am excited to announce my new digital initiatives via Zoom! If you are a library, book club, or group that would like to host, please contact christie@authorsunbound.com. If you would like to register your own kiddo or yourself into a pre-planned event that I am running, please see the info below!
JJK's Creative Camp for 8-12 YOs (smaller roster—50 attendees) June 22-26 at 1 PM ET https://us02web.zoom.us/webinar/register/WN_on8Ox8QnQgi7hKEHIt-wsQ 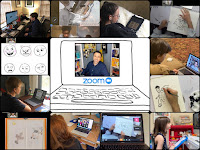