Cleaning out my studio has taught me one thing: I AM A PACK RAT. Though I may have already known this. There are certain things that are important to keep - nice letters, old drawings, photos, etc. But do I really need the camp address book from 1997? Or a mouse that was from 2 computers ago? Or the manual for my Voice Stream cell phone from 1999?
I continue to dig with every new drawer I clean out...
Posted by Jarrett J. Krosoczka at 12:34 PM No comments:

Email ThisBlogThis!Share to TwitterShare to FacebookShare to Pinterest
Labels: baghead

Back in the day, I worked at this amazing place called The Hole in the Wall Gang Camp. Founded By Paul Newman in 1988, The Hole in the Wall provides, free of charge, a camping experience for children afflicted by cancer, blood disorders, and other serious illnesses. Needless to say the camp had a huge affect on my life. I spent 6 summers working on full summer staff and 4 more summers volunteering a few weeks here and there. I wasn't able to volunteer last summer and I'm not sure if I'll get to go back this summer, but would love to. Anyhow - the point of this post - I just found an old songbook that I designed. After every meal, the dining hall is filled with 120 uproarious kids singing and dancing their favorite camp songs. In the summer of 1998, this is the book that they reached for - Posted by Jarrett J. Krosoczka at 1:05 PM No comments:

Email ThisBlogThis!Share to TwitterShare to FacebookShare to Pinterest
Labels: back in the day

Punk Farm on Tour is officially available as a pre-order on amazon.com! Check it out!
Posted by Jarrett J. Krosoczka at 9:56 AM No comments:

As I paint nearly every day, when it came time to paint the walls in my new house, I thought - EASY!

Well, it's actually the opposite of easy. It's a lot of work and it's time consuming! Here are some things that I've learned so far.... Those little contraptions that say that they will help you paint the line along the ceiling - they don't work. What they do is they get paint on your ceiling. The blue tape works much better. Except the thing with the blue tape is, if it's off by the smallest fraction of an inch, it's very noticeable when you're done painting and you peel the blue tape off.

I guess I'm just used to painting in a very messy manner. And the beauty of painting for print it is, that during the design stage, your paintings get cropped, allowing for a very clean edge.

Take the following for example -

What my painting looks like before cropping (on a very messy, paint splattered desk) Jeremy and Jamie, my good friends in Texas, own and run a mural and faux finishing company called Imago Dei. Now, I've been watching their business grown for years and have always admired the beauty of their work. They are creating works of art on walls, it really is jaw droppingly amazing. But it wasn't until I struggled to paint one room, one measly color that I could come to an even deeper appreciation and love for what they do. I for one, would not be able to do what they do. Check out their work here - www.imagodeigallery.com.

Posted by Jarrett J. Krosoczka at 9:37 AM No comments:

If you haven't seen Mr. T's new reality show, you are missing out! I Pity the Fool is pure genius!!!

In watching the show, I started to wonder, "Is 'Mr. T' Mr. T's legal name? And when did he start sporting the Mr. T mohawk?" Well, hooray for Mr. T's entry in Wikipedia! Did you know that Mr. T had an album back in the 80's entitled "Mr. T's Commandments"? And also made an inspirational video called "Be Somebody...or Be Somebody's Fool"? I sure didn't. But I found myself wondering, "What did that sound like?" Well, hooray for YouTube!

For your viewing pleasure and in honor of my mother on her birthday (Happy Birthday, Mom!) - I give you Mr. T's "Treat Your Mother Right"!

Posted by Jarrett J. Krosoczka at 9:08 AM No comments:

Arthur art on auction for a good cause

I just received word from Marc Brown that Sotheby's will be auctioning off 30 pieces of art from the Arthur books to celebrate Marc's 30 years in publishing. And the best part- it raises money for a good cause.

Check out the auction at sothebys.com! 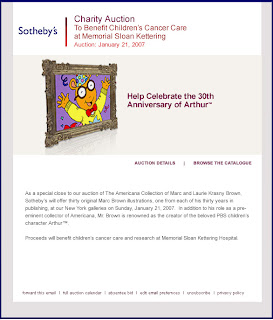 Posted by Jarrett J. Krosoczka at 9:04 AM No comments:

“That sounds like torture!”
- Kid in response to the numerous rejections an author receives.
Posted by Jarrett J. Krosoczka at 12:23 PM No comments:

During a school presentation today, a young boy, who was sitting in a chair with his legs crossed, pointed his finger in the air and proclaimed:

2006 - man. What a year! It was a year where my mind was constantly spinning. It was unbelievable. And I want to thank all of my readers and supporters for making it such an incredible one. There were lots of changes all around. For starters, I obtained representation. Up until then, I had been going it on my own and while I learned a lot in those years, I'm very fortunate to have found an agent in Rebecca Sherman over at Writers House. And further fortunate for Rebecca and I to have teamed up with Eddie Gammara over at the Gotham Group for TV and Film stuff. Because this year - I had my first film option! It was such a nutty time. DreamWorks Animation optioned the film rights to Punk Farm and then when it was announced, it was on the cover of Variety! I couldn't believe it! I still can't! It truly was a validation for all the work that I had done over the years. Thinking back to being a boy growing up in Worcester, MA I never could have dreamed something so huge would happen to me. And while there is still so much work to be done before it would be in theaters, I am anxious and excited for the road that lays ahead for that project.

I saw the release of two books this year, Giddy Up, Cowgirl and My Buddy, Slug. While touring for Slug, I was constantly pinching myself. This is a book that I had been passionate about for so many years and there it was - a full-out published book. It only got to that point after I had re-imagined the story, pushed various aspects and then pitched it again to my publisher. It's weird to think that Slug is in some ways behind me now.

I spent another great portion of the year working with my editor Michelle on what will be my 2007 release - Punk Farm on Tour. I actually pitched this book to my publisher just before the first Punk Farm was released, so it's been in the works for a while. I spent many hours in nature labs drawing and redrawing various animals to prepare for this book and I am really proud of how all of the finished paintings came out. Revisiting these characters was like dropping by on old friends. I can't wait to post more images from that book this year. The book itself will be released in October 2007!

Just before 2006 closed, I began work on a project that was about 5 years in the making for me - my first graphic novel series! I'm jumping right into it in the new year. Comic books and comic strips really sparked my interest in art and picture books in the first place and I'm excited to get back to working in that medium!

Fitting all of that into one year would be enough, but even BIGGER than any of that news..... now I try not to get my personal life involved with this blog, but......

I am an engaged man! Yes, it's true- 2006 will be remembered as the year that I fell in love with a girl named Gina and at year's end got down on one knee and proposed marriage. You may have heard me sheepishly mentioning a friend named Gina over the year or even saw her picture all over my Flickr pages of the Slug book tour. She is an amazing, wonderful, outstanding, funny, beautiful person and when I met her I knew that I had met my match! We do nothing but laugh and I couldn't be more excited to have found someone who can join me on my crazy adventures.

I sure did and I'm thankful for it all!
Posted by Jarrett J. Krosoczka at 2:10 PM No comments: