Yesterday, I received a large envelope in the mail from Random House. I could feel that the envelope was sturdy... 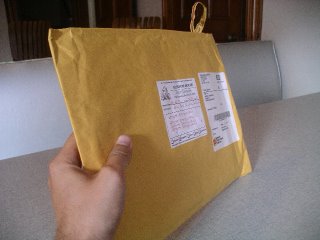 That meant only one thing... 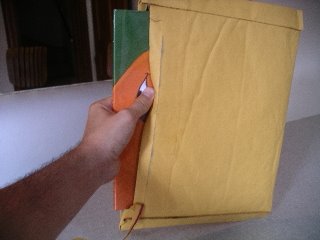 Before even tearing open the envelope, I knew what it was... a hardcover copy of My Buddy, Slug!!!! 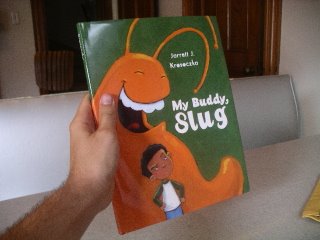 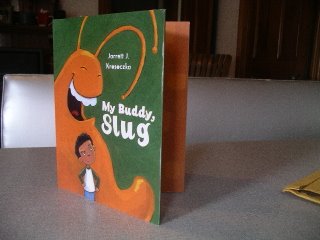 And now all of the creative work for the book is DONE! 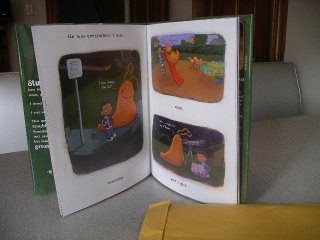 But then - there's the book tour! The My Buddy, Slug book tour starts on September 12, 2006 (46 days from now)!!! There will be a kick off event in my hometown of Worcester, MA on the day that the book is released!!! So if you live in or around the Worcester area, I hope to see you at the Barnes and Noble on Lincoln St in the early evening. The exact time for that - as well as info on the other 14 or so cities that I will be visiting this fall will soon be listed both here and at www.studiojjk.com/events.html

A BIG congratulations to my friends Tony D and Holly Black! If you haven't heard already, their book series - The Spiderwick Chronicles - was optioned as a movie by Nickelodeon and Paramount a little while back. And NOW - they have a greenlight!

Read all about it!
Posted by Jarrett J. Krosoczka at 10:07 AM No comments: 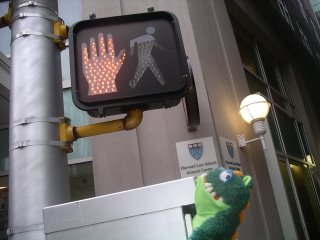 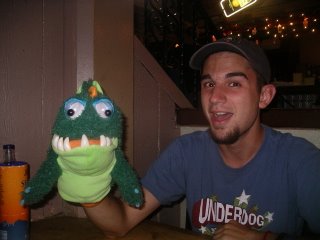 This past weekend, my old friend Galen was in town. Gina and I had just been shopping for presents for friends' newborn babies. I bought a monster puppet. But we fell in love with the puppet too much, so we decided to keep it and I now have to find a new baby present for my friend. The three of us couldn't stop talking as the puppet. It's sort of like how Jim Carey 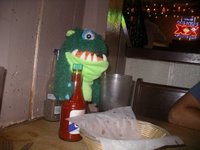 putting on the mask in the movie The Mask...the puppet just sort of took over your personality.
He definitely came out in public with us.

But this time I had a monster puppet. 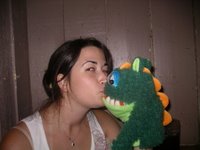 I brought the books up to the counter.
And then the puppet said (in gruff monster voice), "Hello, would you like
for my friend here to sign these?" Now as odd as it sounds - people respond to the puppet. Even though my lips are moving, they look at the monster. So the monster carried on a conversation with the sales clerk and a woman witnessing this whole ordeal said, "Did you write that book?!"
The monster replied, "Yeah, and he illustrated it, too."

At this point my friends couldn't deal with the absurdity. We walked 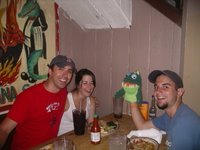 around Harvard Sq for another hour or so and then headed to the Border Cafe for some Mexican food. The monster puppet asked for a table. We were seated and oddly enough, people gave us looks. Mostly smiles. A monster puppet sure cheers people up. The people at the table next to us were talking about us. The monster puppet wouldn't stand for it.
In a gruff monster voice, he said, "Excuse me, I'm right here, I can hear you talking about me!" The woman at the table struck up a conversation with the puppet. Then turned to me and said, "I was that lady at the book store, I bought your (Punk Farm) book, because I teach music to elementary school kids. Could I take a picture with you?" Whoa. Needless to say, the monster facade was dropped, because that was just crazy. Even crazier - she was in town from - Wisconsin! What are the odds? Her friend asked, "So are puppets your thing?"

That's sort of an embarrassing question. But all ego has to be thrown out the door when you and your friends are walking around town with a monster puppet who talks to random people. "No, puppets aren't my thing."

But we did walk aorund to strangers and asked, "Could I take a picture of you with my puppet?" 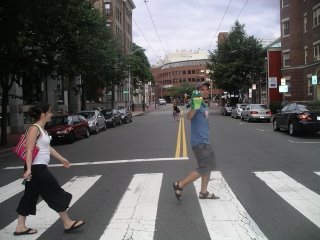 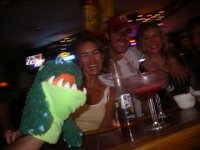 I was just doing a little spring (ok, mid-summer) cleaning in the studio and found these. thought you would like to see them. 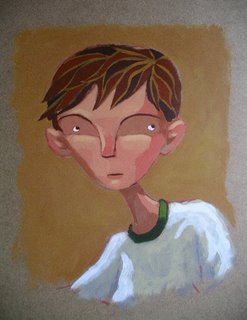 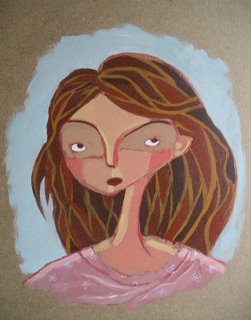 Posted by Jarrett J. Krosoczka at 11:03 AM No comments: 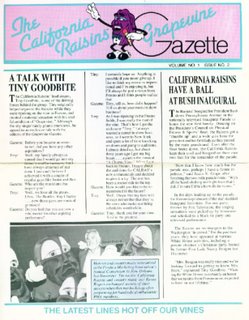 I just found this when I was looking through an old drawer.
Posted by Jarrett J. Krosoczka at 11:44 AM No comments:

when my diner was new 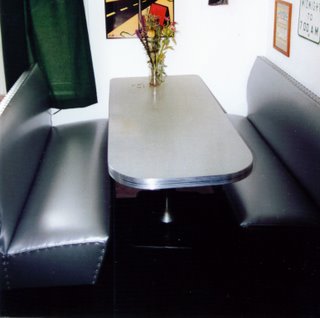 My first piece of ridiculous home decor came in 2000, when upon walking past an antique furniture store, I saw this - a shiny, beautiful booth set from an old diner. I splurged and it was the best purchase I ever made. Unfortunately, it needs to be reupholstered these days. But it's still great to have dinner parties on. When someone sitting on the inside needs to use the restroom, everyone needs to stand up to let them out.
Posted by Jarrett J. Krosoczka at 11:40 AM No comments:

When I was searching for info on Will Vinton, I found these. They're awesome! Vinton Studios became Laika/house and they produced some hilarious Spanish commercials for Coca-Cola and the World Cup.

http://www.laika.com/house/?m=bookmark&g=directors&c=new
Posted by Jarrett J. Krosoczka at 9:33 AM No comments:

My friend Kevin and I were just down in Virginia visiting our friend John. While John was in class during the day, Kevin and I had said that we would take the train into DC and check out the Smithsonian Museum of American History. But when we woke up, we were lazy and dragged our feet about it. That was until Kevin looked on their website and saw that there was a Jim Henson exhibit. We were out the door within minutes.

I'm sure this goes without saying, but the Muppets were a huge part of my childhood. They were another obsession. The exhibit was cool. Definitely worth seeing if you are in the DC area. It was small, only a few glass cases, but it was worth it to see the Swedish Chef, a few members of the band and the original Kermit, along with the cast of Sam and Friends. 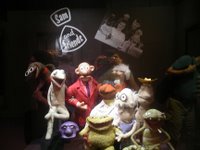 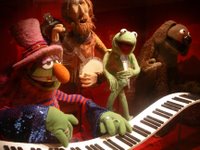 A few days after getting back to Boston, my friend Gina reminded me that we still hadn't seen the Will Vinton exhibit at the New England Institute of Art. We went to that last night. Not as many California Raisins as I had hoped and the Noid was nowhere to be found, but impressive just the same. They had a video loop of Vinton's work and I loved seeing the old California Raisins commercials. 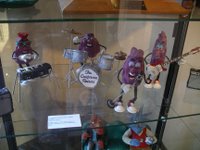 And if nothing proves it, this will. It's my official membership to the Smurf Fun Club. I was obsessed with the little blue guys, watched the show, had all the toys and even stacked up three apples to imagine just how tall they would be in reality. I saw "Smurfs on Ice" and even had a Smurf club house in the backyard. (If I can find a picture of it at my parents' house I'll post it sometime - it really was amazing.) I also saw "Snorks on Ice", but it just didn't compare. 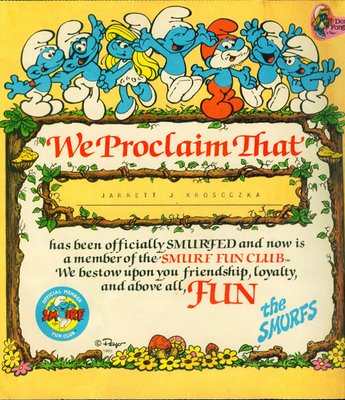 In 2000, I traveled to Europe with my friend Kevin. We had a 6 hour layover in Brussels. What does one do with 6 hours in Belgium? We went straight to the Belgian Comic Strip Museum to see works by the one and only Peyo. They had an exhibit set up to look as though the Smurfs were an actual people who had since died off and the museum held their artifcats - Gargamel's potions, Hefty's weights, a mushroom house cut in half... It was outstanding. 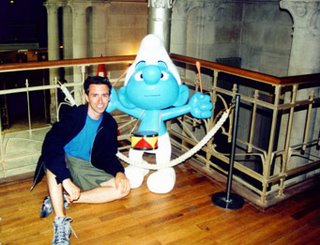 I was also a member of the California Raisins fan club. I would get the newsletters. I have one around here somewhere... But in the meantime, I am very excited to check out the Will Vinton exhibit at the New England Art Institute!
Posted by Jarrett J. Krosoczka at 12:41 PM 3 comments:

....started the paintings for a new book. You should see it in fall '07. I wrote the first draft in the fall of 2004 and the last round of revisions are just about to get approval from my publisher.

What is it you ask?

I'm going to keep you in the dark for now. But as time goes on, I wanted to give you perspective on the timeframe that a book takes. I kind of gave you an in with this blog on My Buddy, Slug, as I started blogging as I handed in the artwork. Here, I'm starting with the day I started the paintings.......

It's a very exciting feeling when you first put the brush to the paper. And there is a huge range of emotions that you go through as you try to finish everything. Stay tuned.....
Posted by Jarrett J. Krosoczka at 10:16 AM No comments:

For the past few years, I've been visiting Thoreau School in nearby Concord. When I was there last December, they informed me that they had built a new Thoreau across town and that the current building was being torn down. We were in the auditorium. I instantly asked, "Could I have a few rows?" At first they thought I was a bit off, but I love random stuff like that. I have a diner set and an old Pac-Man machine from 1981. And now I am the proud owner of 2 rows of theater seats! I was going to go for 3 rows, but that just seemed a bit excessive. ;) 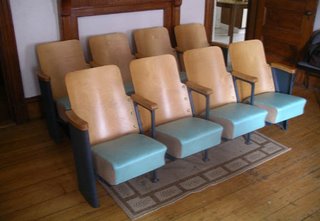 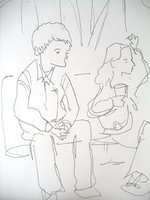 The other day, I was driving up from the Cape and saw this road sign - 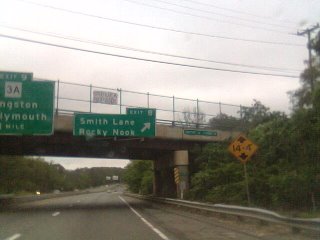 I grabbed my phone and snapped a picture. I sent it to Lane Smith and he thought it was eerie, because he had recently driven by the Cape and saw this road sign. 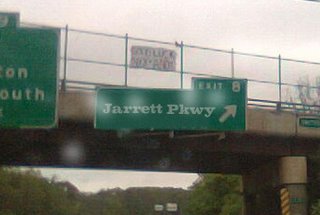