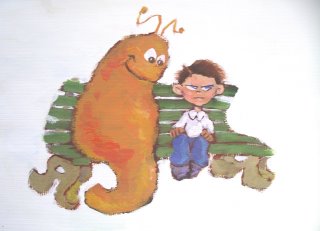 It’s 1997. The fall semester. I’m a junior at RISD and enrolled in a class called “Picture and Word”, where we are writing and illustrating picture books. It is by far the coolest class I have yet to take. In the class I write a story called “Hello,” said this Slug. Eager to get my rejections out of the way, I submit it to a publisher. It is promptly rejected. So I send it out again. And again. And again… Some rejections are nice, some are harsh and some are form letters on half sheets of paper (clearly I wasn’t even worth a full sheet). So I move on, write more stories, graduate, etc. But I am still sending SLUG out and still getting so much positive feedback from everyone... my family, my friends, all of the kids at camp…so I keep sending it out. And it keeps getting rejected.

Then something miraculous happened. Random House gives me a contract for Good Night, Monkey Boy. Amazing! A book of mine is actually getting published. “This is it,” I think. Now it will be easy to get my SLUG published. Except it isn’t. It gets rejected…again.

Then one day my friend Sarah Tucker (whose namesake was used much to her chagrin in Baghead) tells me that SLUG is by far the best story that I’ve ever written and I need to get it out there. So I rethink everything and completely retool the story, changing scenarios around, but keeping character traits, certain themes and a few jokes in line. And I submit it to Random House. But nothing happens with it. Max for President happens, then Punk Farm happens.

I mention to my editor Michelle that we never really talked about the new SLUG, because we both got so caught up in my new projects. Then I begin to think of a scheme. I will inundate her and everyone at Random House with little Slug paintings. They’ll get dozens, hundreds of them in the mail and they won’t be able to ignore him!

I make three and then I get a phone call. It’s my editor Michelle. “We love Slug and want to pick it up!” My jaw drops. We finish our conversation and hang up.

I pick up the phone and call my grandparents, every family member and every friend who ever listened to me talk about this story about a boy who met a giant slug. It’s December 2004 and my dream book is beginning to become a reality.

So the following months are spent editing the story, rehashing sketches and shaping the book up. After six or seven revisions we have a version of the book that’s nearly ready. I’ve gone though dozens of new title ideas and we have a few that might work. It’s near the end of summer and I now need to paint! 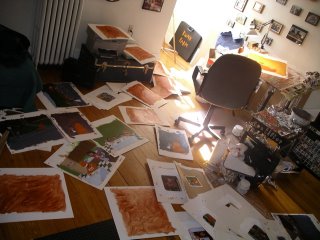 I’m painting in the early morning, throughout the day and into the night, until it is officially morning again. This happens over and over again. I’m throwing my studio in a suitcase and bring the work with me while I’m on the road. I’m painting in Jamie and Jeremy’s studio in Houston (which is amazing as Jamie was in that original RISD class and we haven’t painted together since college – and there I am, working on that same character once again). I’m working on revising texts while on airplanes. I’m in New York City and painting in Katie and Dan’s living room, putting the finishing touches on the paintings until 3 AM the night before the book is due. 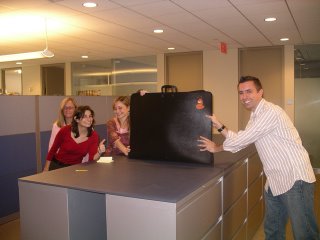 And then the day. November 18, 2005. I hand in all of the paintings for the book I had always
wanted to make. I debuted the work to all of the good people at Random House and then my editor Michelle, her assistant Michele, my designer Melissa and publicist Christine all have an amazing lunch; a lunch-a-thon. I then bop around the offices for the rest of the day saying hello to people and sitting and talking about plans for the book. So of course I’m ready to take a break, but then my art director Isabel shows me something.

It’s evening and I return to Katie and Dan’s house and I crash. I wake up from my nap and I start to wonder, “Did all of that really happen? Did I really hand in the art for SLUG?”

So now I wait. In just under a year…9 years after I initially conceived the story…My Buddy, Slug will be in bookstores. 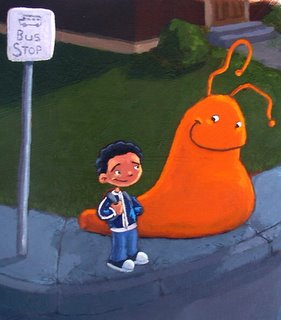 Amherst Reads was a great day all around. Angela worked her butt off to make the event a success and it was a HUGE success. The literary celebration centered around the works of Jon Scieszka, who is a living legend in the industry. I had the chance to be a part of the Guys Read section of the day’s events with friends Tim Basil Ering and Tony DiTerlizzi. When the day was done, we all celebrated with Chinese food and I couldn’t help but be amazed by the energy and the creativity of everyone around me. I’m continually feeling as though I am a real part of something as I grow into this world of children’s publishing. After spending time with Jon, one can’t help but feel a sense of awe of what he has accomplished and by his good nature. He is a role model for all of us who are publishing. 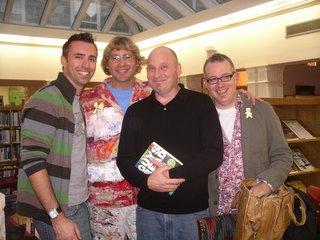 PS - We were also attacked by ninjas.
Posted by Jarrett J. Krosoczka at 9:00 AM No comments:

That's my slogan pitch to the KC tourism council. I've been in KC almost all week and ya know what - it's a great city. Not that I didn't think I'd enjoy it, but it really is a cool city! I'm sititng at the airport about to board and get home. I spent the day today at Kalaedoscope, which is this amazing craft/art/creative place attached to Hallmark. So much fun talking to kids out there. Tomorrow is Amherst Reads w/ Jon Scieszka. And I have so many paintings to get done in the next two weeks. Ugh! I hope I make it.

And last weekend was easily one of the best weekends of my life. One of my best friends, Ali Baghai got married. (You may know him as the guy who took my author photo for Bubble Bath Pirates! or the guy at the San Diego radio interview with me in The Punk Farm Book Tour Movie.) Everything about the weekend was just outstanding. A big house on the water that all of his friends rented. Non-stop fun. And me and a wedding reception dance floor is like a were-wolf and a full moon....I can't be held responsible for anything that happened. 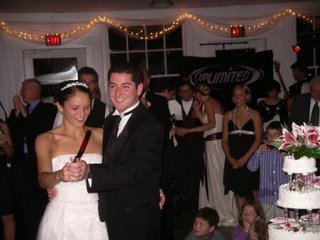 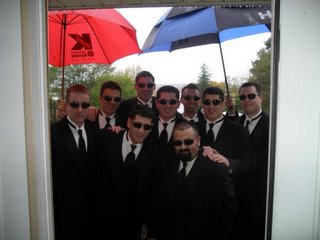 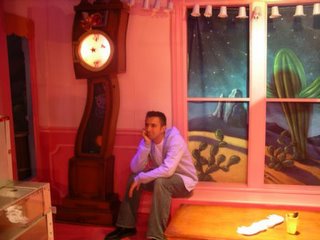 today i was running errands...at the mall. and i ate sushi in the food court. it was good, even though i feared death from eating sushi at a food court.

a few hours later i walked by Cinnabon...it looked too good to pass up.


what's wrong with me?

So this morning was rare, in that i woke up early and left my house before 7:30 AM. I took the train into Government Center, because I was interviewed for 7 NBC. I guess the news people like to wake up early. Illustrators don't.

Anyhow, I hadn't eaten breakfast. How could I, when I needed to leave by 7:30? So I stopped at Dunkin Donuts. With a coffee in one hand and a donut (glazed) in the other, I walked across the Government Center steps when a seagull came awfully close to my head. It startled me and I joked with a stranger passing by. When "SQUAWK!" another seagull came close to my head, and grabbed at my hair. It freaked me out and I looked up to see a dozen or so seagulls circling me.

THE DONUT! I thought. They wanted my donut! I shoved it in my mouth and ran.

I wasn't about to give up my donut.

Posted by Jarrett J. Krosoczka at 10:09 PM No comments:

i had a livejournal, so now i have both. maybe i'll update both someday. right now i need to paint. PAINT! my 'slug' book is due next week. it's the book that i always wanted to make. the book i always dreamed of. and i'm procrastinating.......

but when i was flying back from kansas city last week, i made this teaser for the random house employees..... www.studiojjk.com/getreadyforslug.html
Posted by Jarrett J. Krosoczka at 12:21 AM No comments: 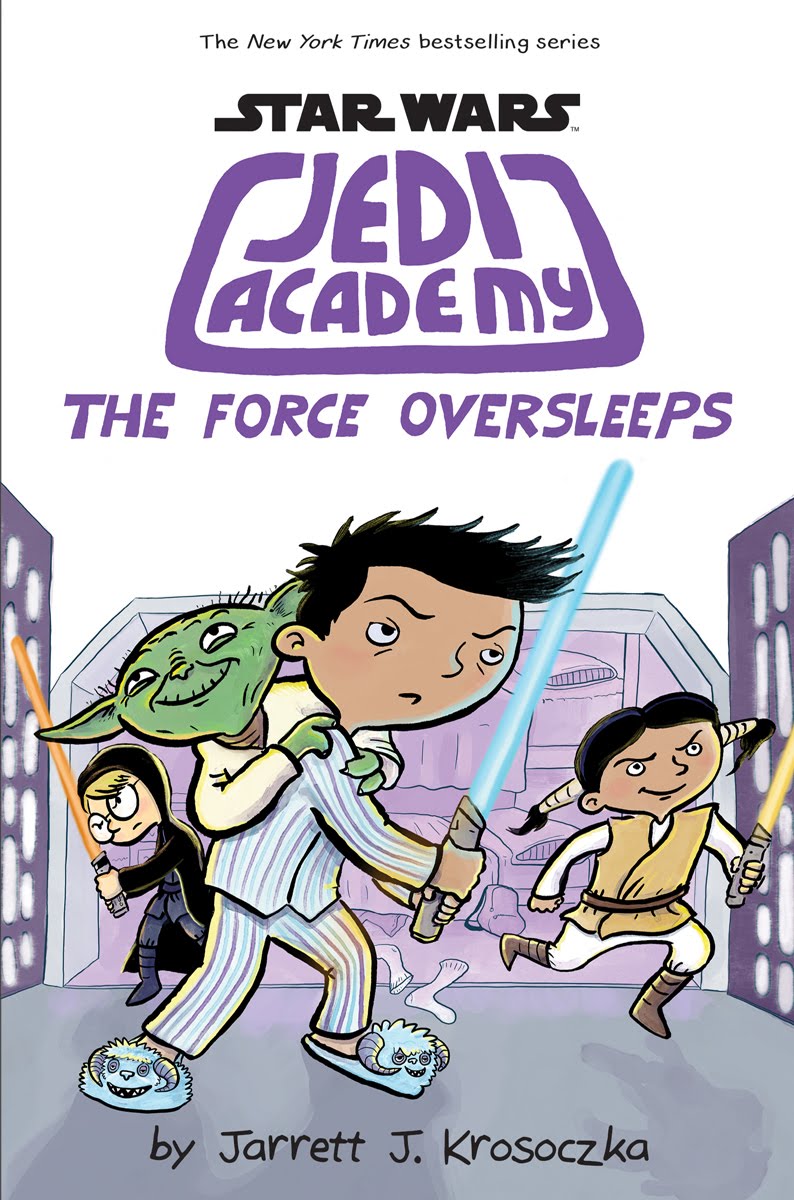 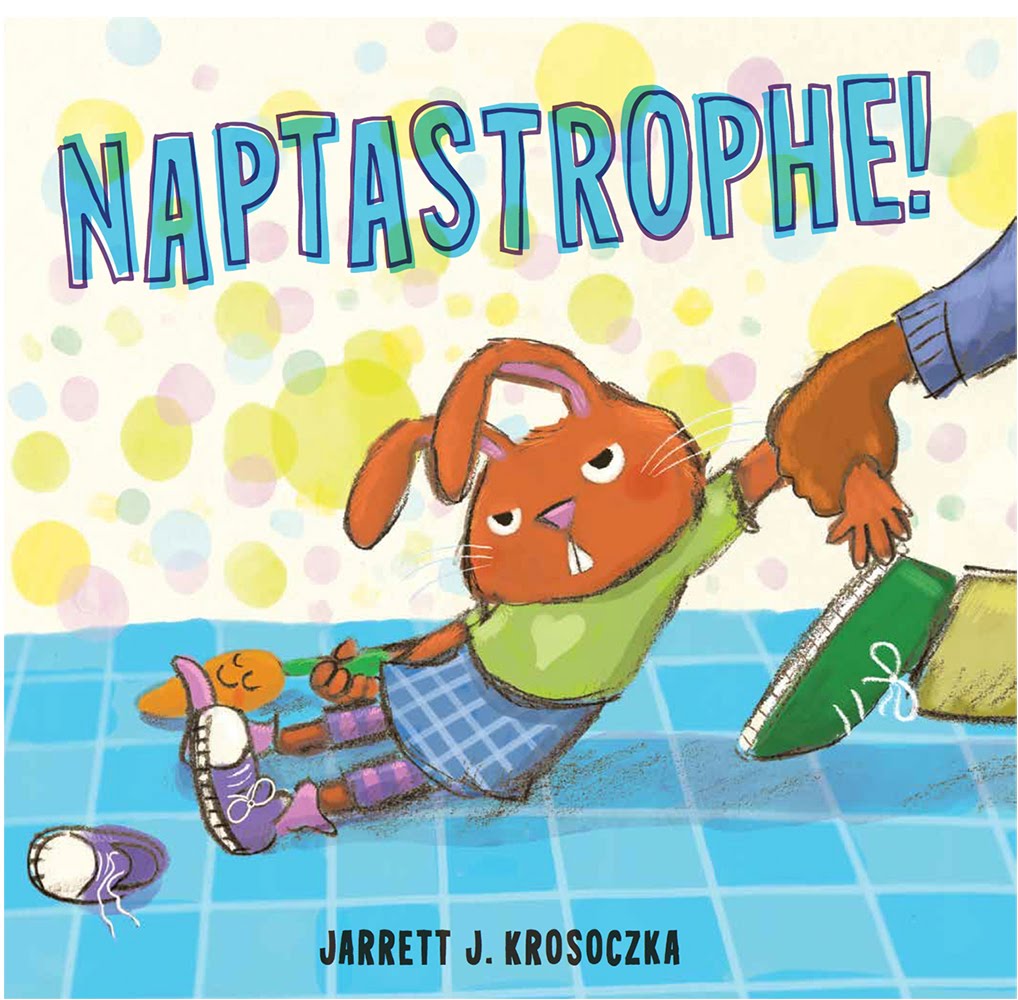 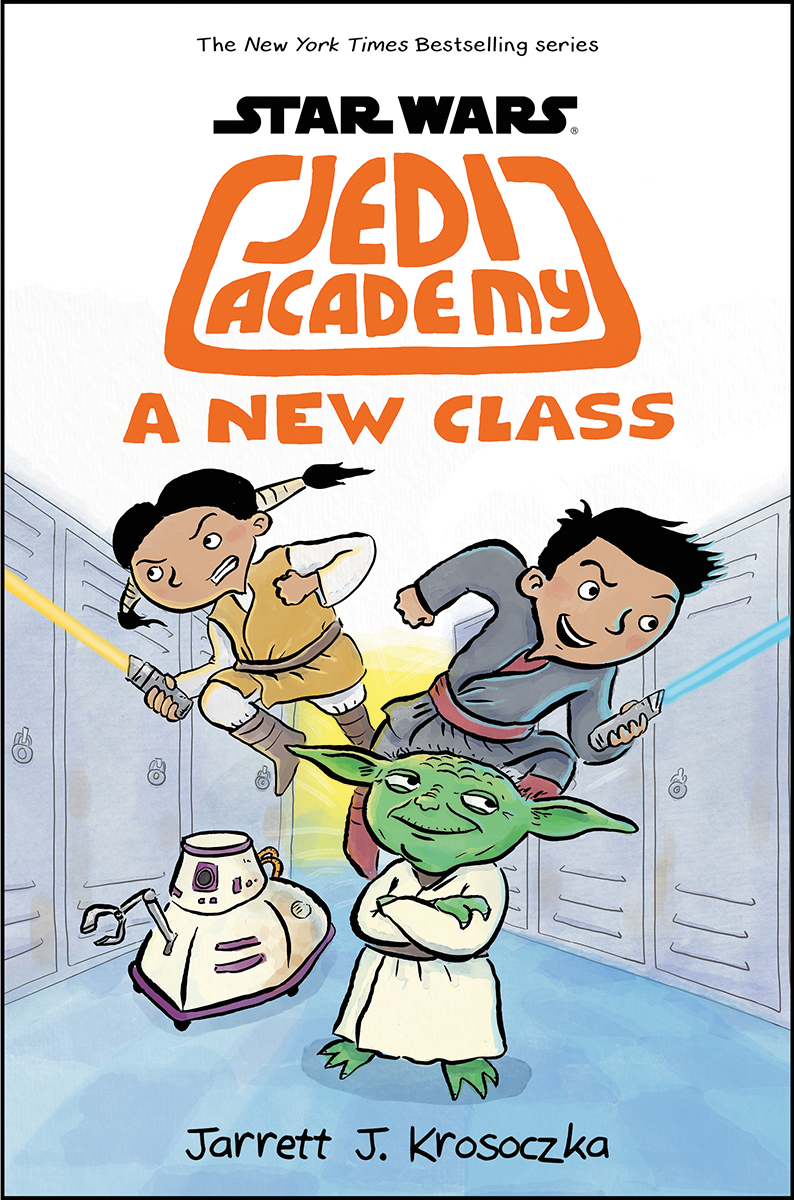 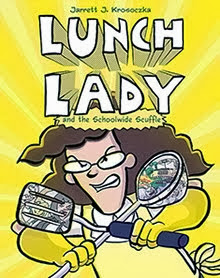 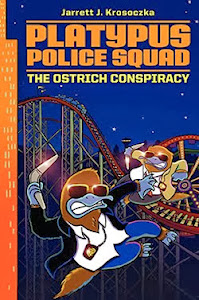 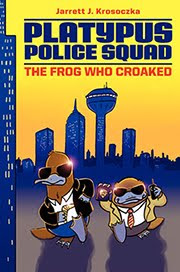 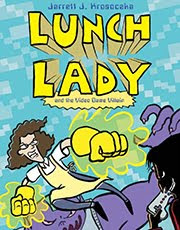 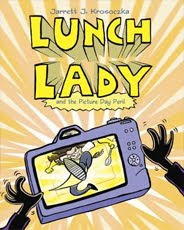 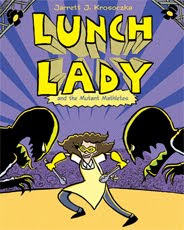 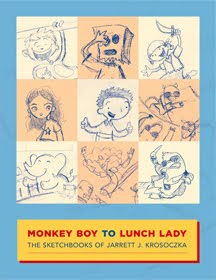 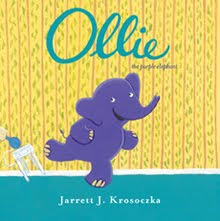 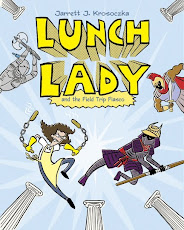 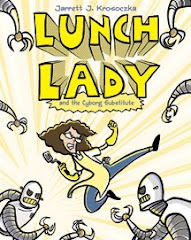 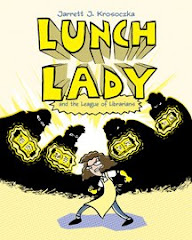 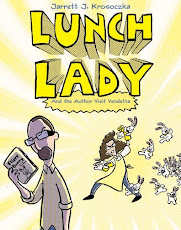 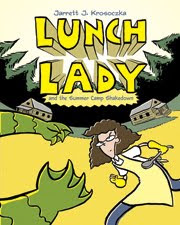 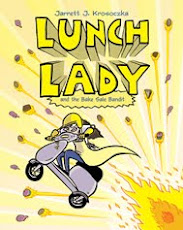