The League of Librarians 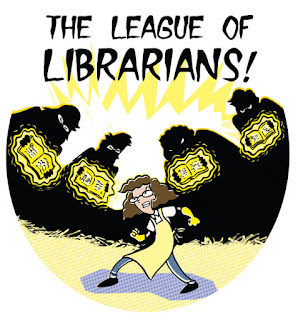 Recently on Twitter, I was asked by a group of librarians if I would design a League of Librarians T-shirt. Apparently, they had adopted the name for their team in The Summer Throwdown, an online competition between teachers and librarians to see who could read the most books over the summer months. Originally, they were Team Librarian, but took on the monicker of League of Librarians (from the 2nd volume in the Lunch Lady series) to strike fear in the hearts of their opponents. Needless to say, I was honored and much to their surprise, designed something up and placed it on Zazzle. Their enthusiasm was just fantastic. After the book was published, I did receive a few messages from librarians who were pretty angry about the book. This really upset me because the book was meant to be a cheeky love letter to librarians and I hate the thought of my work upsetting a group of people that I hold in such high regard. As an author, you can receive heaps of praise, but you remember the few voices of dissent above all else. The excitement from this group over on Twitter erases all of that beyond measure.


So GO #LeagueofLibrarians!!!
Posted by Jarrett J. Krosoczka at 8:31 AM

Thanks so much for allowing us to use League of Librarians so freely on Twitter and for putting your amazing artwork on a t-shirt for us! We LOVE your "cheeky love letter" to us and all of your other Lunch Lady books. :)

The only thing that would be as cool as a LeagueofLibrarians T would be a T-shirt for the teachers who almost out-dueled them in the #SummerThrowdown.

Clearly, your design inspired the librarians and pushed them over the top.

THanks for all you do.

I was stopped in the store when I wore my shirt, the librarian wanted to know where she could get one! And she was an academic librarian! I can't thank you enough for your quick response and for allowing us to be the #leagueoflibrarians! I can't wait to wear it to school!