There have been inquiries for larger orders of signed Lunch Lady books for School Lunch Hero Day. Odyssey Bookshop is my local indie, and they would be more than happy to help you! You can call the store at 413-534-7307
and ask for Hannah, the head of the children's book department. Orders would need to be made by end of business day on Thursday for books to arrive in time for May 1st. Thanks! 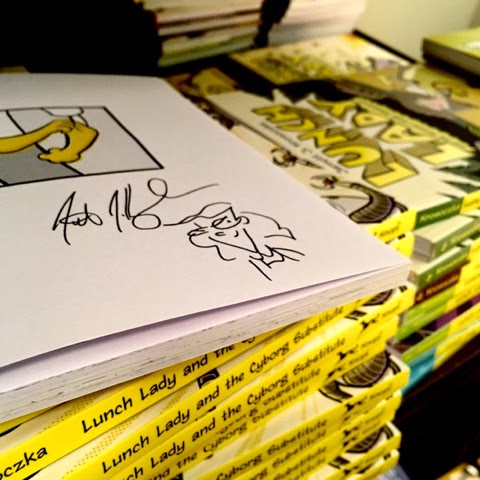 Posted by Jarrett J. Krosoczka at 8:44 PM No comments:

"I read all them books!"—five words that will stay with me

Last week I spoke at an after-school program, and it just seemed to be one of those talks that wasn't hitting. The students hadn't seen my books ahead of time, they were restless (it was Friday), we were in a huge gymnasium with no microphone. Even one of the counselors was texting during my talk. I had the younger kids' attention, they were sitting in the front. But the teenagers, who made up the majority of the audience, sat at the back of the bleachers. I powered through my slides and got to the cover of Lunch Lady and the Cyborg Substitute. A teen at the very back who had been slouching the entire time sat straight up and his eyes widened. "You wrote that book?!" he called out, his enthusiasm broke through the tough facade.
"I did," I called back.
"I read all them books!" he said, almost in disbelief that the guy who wrote those books was right there.
Those are five words that I'll carry with me for some time. It is so validating to know that my books brought that kid joy, and it's encouraging to know that even when I think that kids aren't listening, they may be hanging on every word.
Posted by Jarrett J. Krosoczka at 9:42 PM No comments:

Meltdown is this Saturday!

It's that time of year again! This Saturday will be the 7th annual Meltdown Music and Book Bash at Northampton's Smith Voke HS.

Gina and I have an exciting lineup of authors for you. Learn more in my radio interview with the ubiquitous Monte Belmonte here: http://wrsi.com/monte/meltdown-2015-jjk/

And check out the author line up! Bill Childs has once again lined up a superlative list of bands to take the stage before and after all of these author slots!

Posted by Jarrett J. Krosoczka at 8:53 PM No comments:

I'll be signing books at Children's Book World in Haverford at 4:30 pm on Monday!
Hope to see you there! 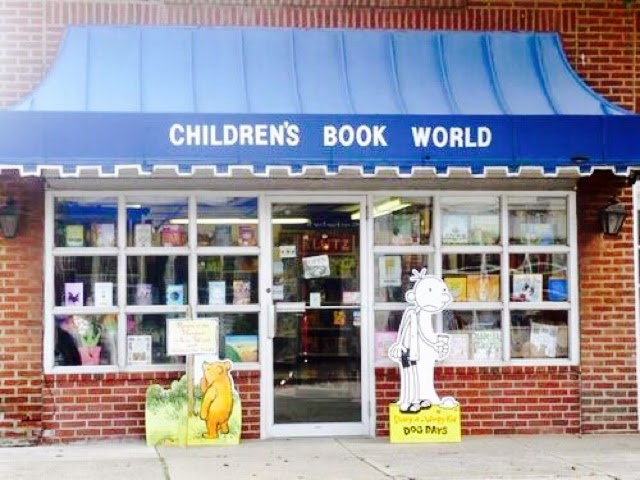 Posted by Jarrett J. Krosoczka at 9:11 PM No comments: 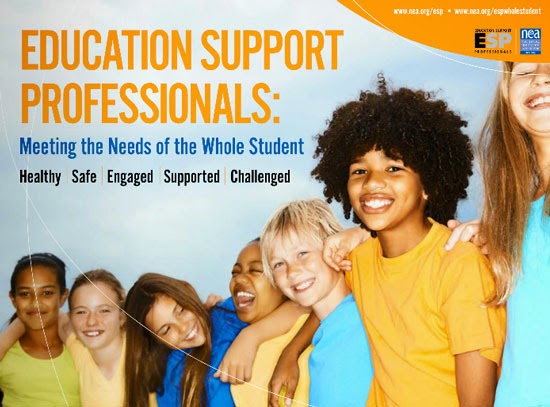 The National Education Association just published a digibook about Education Support Professionals. Learn about what everyone does for the whole child, and read some great stories of magic happening in all corners of our schools. I am proud to have contributed an article on what I see happening in the schools that I visit.

Find the link to the free book here!

Posted by Jarrett J. Krosoczka at 4:44 PM No comments:

Email ThisBlogThis!Share to TwitterShare to FacebookShare to Pinterest
Labels: articles

This Friday-an event with the Chesterfield County Public Library (Just outside Richmond, VA) 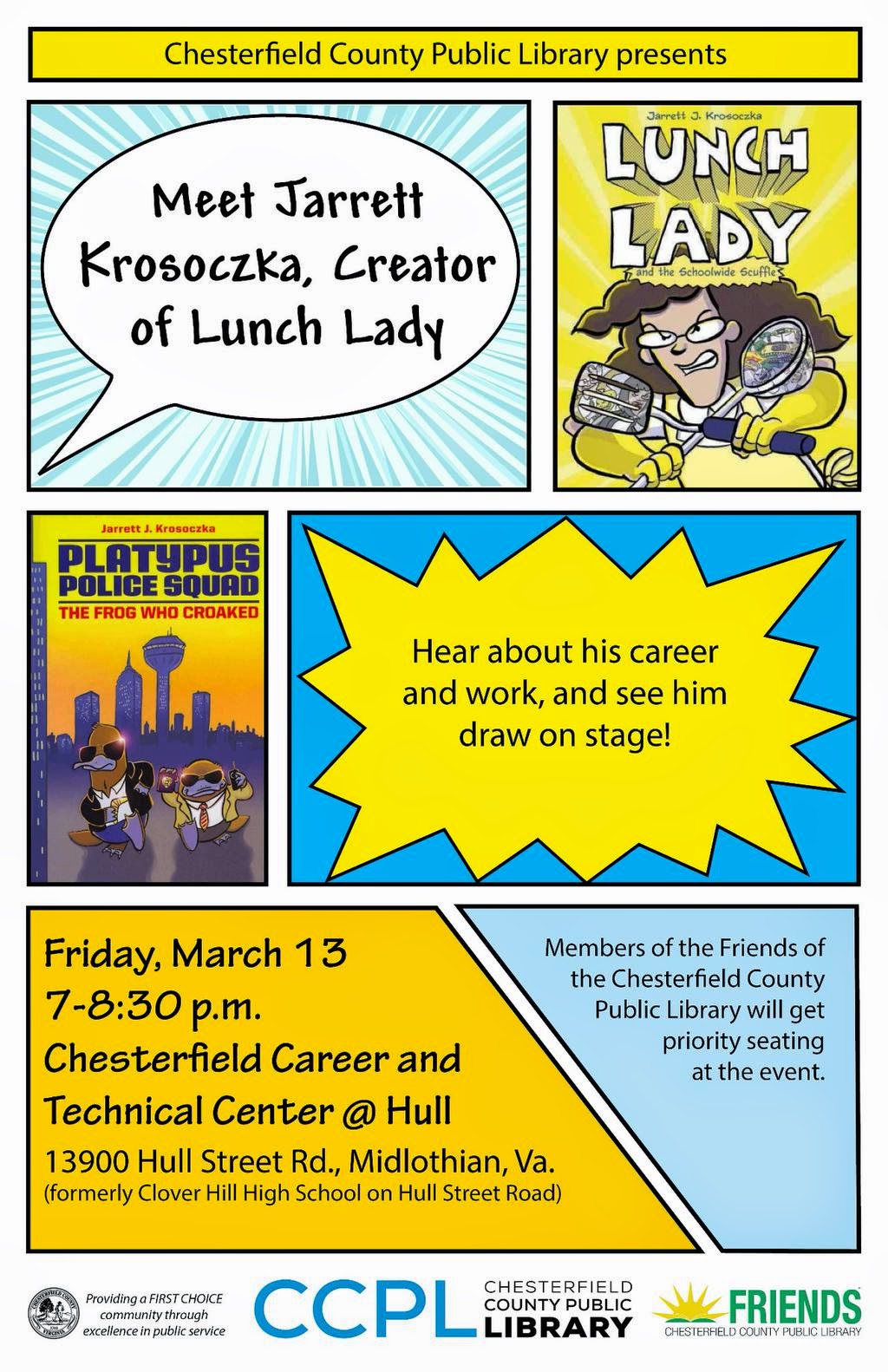 There is no doubt that I will have a BLAST on Friday with the librarians of Chesterfield County Library. Look at that cool flyer they made! And look at all of the super-fun tweets that they have been sending! If you live nearby, I hope to see you on Friday at 7 p.m.!﻿

Here is the event page on their website:
http://ccpl-catalog.chesterfield.gov/record=g1003046&searchscope=0&SORT2=R


This Lunch Lady fan is ready for Fri. night when she gets to see @StudioJJK live and on stage! http://t.co/gj78JWWkBN pic.twitter.com/wWW9sttsPF
— Chesterfield Library (@CCPLVA) March 9, 2015

Posted by Jarrett J. Krosoczka at 9:14 PM No comments:

An interview in Library Sparks magazine

Check out this excerpt from the April 2015 issue of Library Sparks magazine. In this interview I discuss growing up as an artist, growing up with my grandparents and my various projects--including the art that I produced for the 2015 Collaborative Summer Library Program. 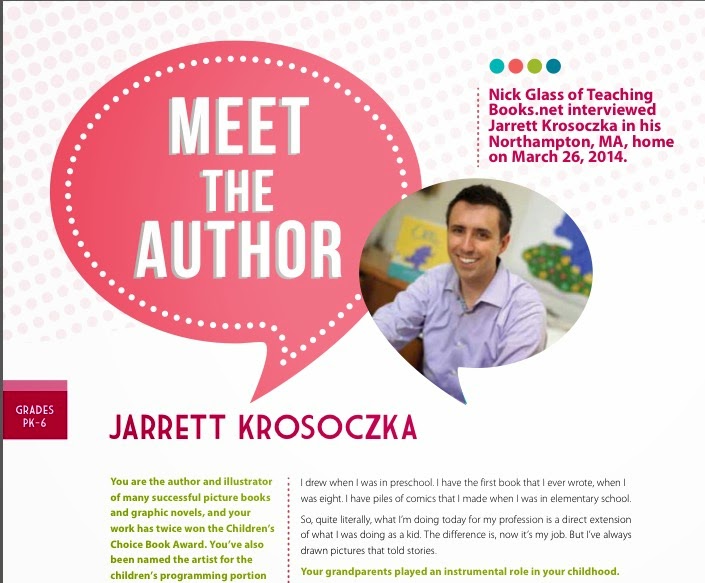 Posted by Jarrett J. Krosoczka at 9:01 PM No comments: